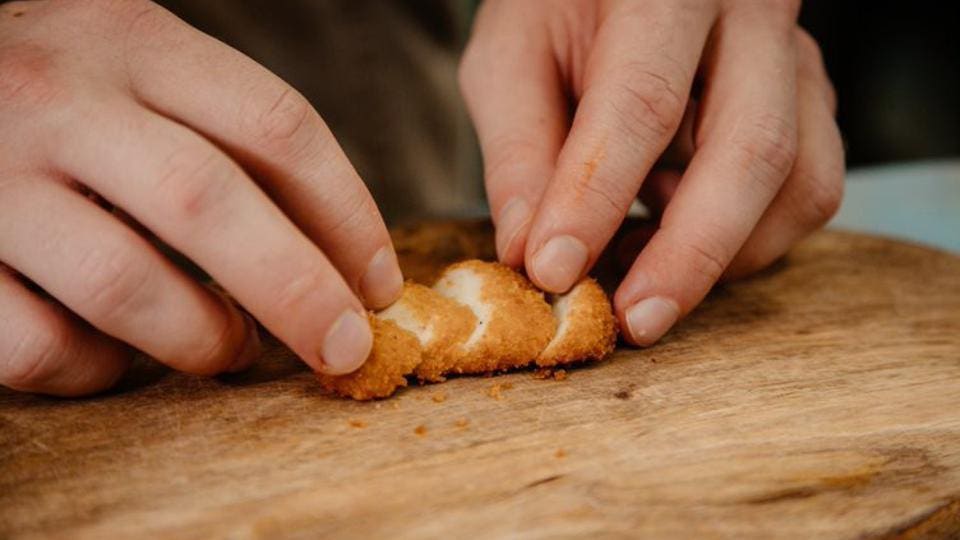 To many, the project of undoing the environmental, public health, and animal welfare damage caused by industrial animal agriculture is important, but the prospect of humans giving up meat is just not realistic. For those, cell-cultured (or “cultivated,” “clean,” “cell-based,” “lab-grown,” etc.) meat is the most promising path.

In just a few short years, cell-cultured meat has gone from a lofty idea to a real consumer product. The concept of growing meat outside an animal has been a sci-fi-esque fascination ever since Winston Churchill suggested the concept nearly a century ago, if not before. But real developments in bringing cell-cultured meat to market have begun to accelerate in more recent times. In 2020, Singapore became the first country to approve cell-grown meat for consumer sale, and soon after the American company Eat Just debuted their animal-free chicken at the private club 1880. In late 2021, Berkeley-based startup UPSIDE Foods (formerly Memphis Meats) opened its first large-scale production facility in California, which is meant to produce 50,000 lbs of cell-cultured meat for commercial sale annually.

At least 60 companies worldwide now make up the nascent cell-grown meat industry, and with nearly a billion dollars invested in 2021 alone, their products are eagerly anticipated. There are still plenty of technological challenges with making animal-free meat, especially at scale – but it shouldn’t be a surprise that a number of innovations to address those problems are in the works as well. With all of the money and brainpower at work, we’re likely to see some major steps forward for cell-cultured meat over the next year or so. Here are some trends I’ve got my eye on right now.

Because cell-cultured meat is such an exciting prospect for many in the food industry and beyond, there’s a good amount of support for the companies trying to make it. Globally, there are several accelerator and incubator programs in place to help promising young companies develop their products and eventually go to market. Many of these programs exist specifically to uplift brands that are seeking to produce environmentally friendly solutions, namely, plant-based and cell-cultured meats and other proteins. The organizations and corporations behind these entrepreneurship programs are making an investment in the planet as well as their own business by supporting innovations in food tech.

Small brands are leading the way

One such program is Nestle’s R+D Accelerator network, which operates across several countries and has taken on some environmentally-minded brands. But it’s not just the Swiss food giant that’s hoping to learn from infant companies making bold innovations. Microbial fermentation, like culturing cells, is a process that’s being used in food tech to replicate animal proteins ex vivo (which is to say, outside of an actual animal). Perfect Day is leading the way with their cow-free, lab-made dairy proteins, which are currently best known as the secret ingredient in Brave Robot’s ice creams. But Perfect Day has caught the attention of much bigger food corporations, too – namely, General Mills, which plans to launch their Bold Cultr line of cow-free dairy products using Perfect Day’s proteins in early 2022. And then there’s The EVERY Company, which had already launched fermented proteins in consumer products like an egg white protein powder sold at Pressed Juicery. The future of animal-free animal proteins isn’t just near – it’s here.  I expect this will push other legacy corporations to take a cue from the startup world and invest in these innovations.

There is still one ethical obstacle for cell-cultured meat to overcome – or at least, there was. Fetal bovine serum (FBS), which is harvested from the fetuses of pregnant cows during slaughter, has historically been the key to culturing animal protein cells ex vivo. Not only is the use of FBS clearly an issue in terms of animal cruelty, but it is very expensive and opens products up to some of the same risks run by traditional meat, like contamination. Fortunately, several companies in the cell-cultured meat space claim to have developed methods that don’t require FBS or any other animal input. These methods are proprietary, so we don’t know exactly what they are – but if a few companies have figured it out, we can surely expect more in the near future.

Corporate intellectual property, however, probably isn’t going to hold the industry back for too long. The Shojinmeat project is an online resource and community for independent scientists to compare notes, share findings, and ultimately support each other in the process of developing cruelty-free, affordable cell-cultured meat. Industry leaders like Shiok Meats CEO Sandhya Sriram believe that DIY cell-cultured meat could be a reality within a decade, facilitated by bioreactors becoming a normal household item. But even in the shorter term, the Shojinmeat project is likely to have an impact. Participants in the project have successfully cultured fish and oysters so far, and the discoveries they share can only help fuel the industry.

From Shojinmeat’s “citizen scientists” to the accelerator-backed company innovators around the world, there’s one particular and possibly unexpected application of cell-cultured meat. While many are focused primarily on growing staples like beef and chicken, some of these teams are working instead on culturing meats that are traditionally expensive, environmentally damaging, or unusually cruel to produce. Shojinmeat has an offshoot project focused on creating cruelty-free foie gras, and a company called Avant Meats is developing cell-cultured versions of fish maw and fish swim bladder, Chinese delicacies typically harvested from endangered species. Vow Food is taking it one step further and exploring animal proteins that are rarely, if ever, eaten by humans – like, for instance, zebra. They’re essentially asking the question, if cruelty weren’t an issue, what else under the sun might we eat and enjoy?

Milk – not just from cows

Of course, coming up with cruelty-free alternatives to traditional cow’s milk is a major point of focus for the food tech space, and companies like the aforementioned Perfect Day are making it a reality. But it’s not just cow’s milk that’s being studied and replicated. Singaporean company TurtleTree is working on cultivating cow-free dairy, but they’re also exploring other practical applications that go far beyond the grocery store: They’re looking into replicating breast milk from other species that have a need for it; for example, snow leopards, which in captivity tend to underproduce milk for their young. Similarly, North Carolina-based company Biomilq is working to develop human breast milk from stem cells, which would then be an available option alongside formula for families who don’t have access to sufficient, if any, breast milk for their infants.

When the first successfully grown cell-cultured burger made its debut in 2013, its price was estimated at over a quarter of a million dollars. In less than a decade, some companies in the food tech space claim to have figured out how to reduce costs dramatically, making them feasible consumer products. Israeli company Future Meat Technologies announced in early 2021 that they can now make their cultured chicken for just $7.50 per serving, for example, and Eat Just priced their GOOD MEAT chicken sold in Singapore’s 1880 club at around $23. Generally, prices still aren’t on par with traditional meat, but advances in technology are allowing brands to make their products for less – which brings them significantly closer to grocery store shelves.

Even though most of these companies aren’t yet ready to start pushing their products to market, regulatory agencies around the world are looking ahead to those conversations. In the U.S. in particular, there’s an ongoing dialogue between the USDA and the cell-cultured meat industry regarding what terminology they’ll use, what labeling requirements will call for, and other rules of the game. We’re likely to hear many of the points being raised on all sides (including the cattle industry, a potential opponent to cell-cultured meat) as the conversations continue. And hopefully, the fact that these conversations are starting already will help move things along more quickly once companies are ready to start bringing products to market.

The landscape of cell-cultured meat, and even microbially fermented animal products, is a complicated place where futuristic technology, ethics, the law, and business are all approaching the unknown together. From an outside perspective, it looks like there’s still a lot to be straightened out before your local grocery store will be selling cruelty-free chicken that’s chemically identical to the regular stuff. But with all the money, enthusiasm, and incredibly innovative thought going into the project, it seems inevitable that we’ll continue to see progress from the industry in the near future. If brands can deliver on their promises, we could be having a very different conversation – and exploring very novel options – this time next year. If the future isn’t already here, chances are it will be very, very soon.

The UK has confirmed its first war death in Ukraine —...