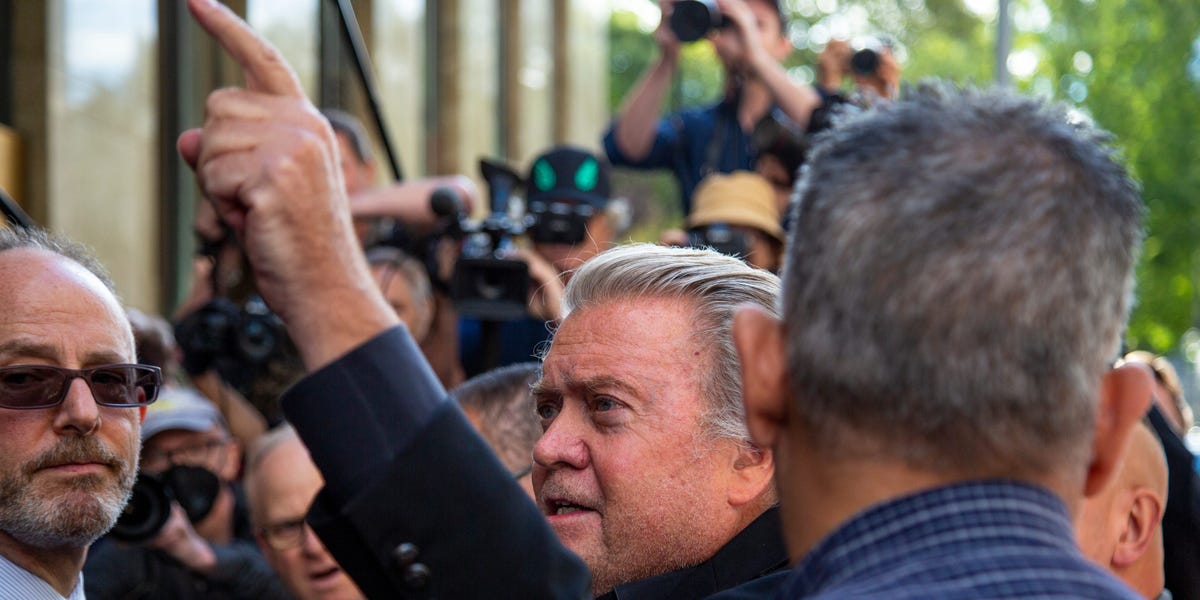 Steve Bannon turned himself in Thursday morning at the district attorney’s office in Manhattan, where he will be held pending an arraignment on state charges that he pocketed donations from the sham “We Build the Wall” charity in 2018.

Bannon arrived shortly after 9 a.m., stepping out of a black SUV and shouting to the press cameras that he was being persecuted.

“There’s an irony, on the very day the mayor of this city has a delegation down on the border, they’re persecuting people here who are trying to stop them on the border.”

“Stop hurting America, you greasy two-bit grifter!” a nearby protester shouted back.

Steve Bannon has surrendered at the Manhattan DAs office — quite the scene #SteveBannon pic.twitter.com/nkrSWJmK2Y

The new charges he now faces will have a familiar ring for Bannon, the right-wing agitator and former Trump White House adviser.

He was busted on the same allegations by the feds in August 2020, when US Postal Inspection Service agents memorably arrested him on a $28 million superyacht off the coast of Connecticut.

Bannon pleaded not guilty in the federal donor-scam case, as he is expected to again before a state judge on Thursday afternoon.

But there are some notable differences. This time around, Donald Trump cannot pardon Bannon, as he did early last year as one in a flurry of high-profile exit pardons and commutations on his final night in office.

And Thursday’s arrest is taking place in far less elegant surroundings than the Lady May, the luxury yacht of the Chinese fugitive businessman Guo Wengui, where Bannon was taken into custody two years ago off of Westbrook, Connecticut.

Bannon instead was met by NYPD detectives assigned to the prosecutor’s office — the so-called DANY Squad — walked through a magnetometer and then escorted up to the DA’s offices on the ninth floor of a lower Manhattan courthouse for booking.

“They’re definitely going to cuff him soon after he walks into the lobby,” predicted veteran criminal defense attorney Stacey Richman.

“He’ll be taken to the ninth floor for processing,” explained Ed Hayes, another longtime Manhattan defense lawyer. “They’ll fingerprint him, take his mugshot.”

After he’s booked, “they’ll probably keep him in the DA-squad office, where they fingerprinted him, or the DA-Investigators’ office,” Saland said.

There, he’ll wait for his afternoon court appearance — quite possibly in a “1970s-era chair,” Saland said.

“They could handcuff him to the chair, they could not. It depends. But it’s certainly not going to be anything like a $28 million yacht.”

China has secured Russian gas at a 50% discount until the...