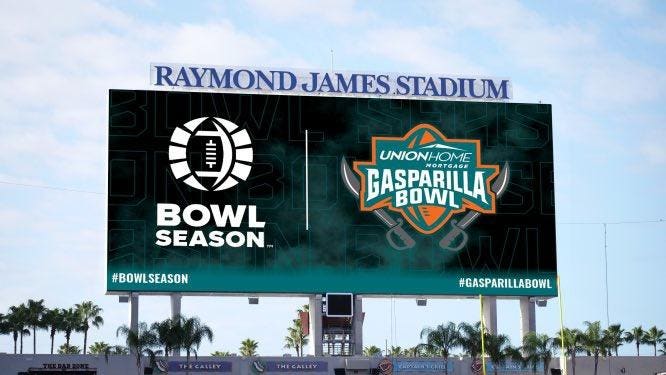 What a difference a year makes.

The 2020 Gasparilla Bowl between South Carolina and UAB, which would have been the first with title sponsor Union Home Mortgage, was canceled due to virus issues with the Gamecocks. This year, the game between Florida and UCF at Raymond James Stadium sold out in three days from when the matchup was announced.

“It did not surprise me to see tickets move as fast as they did once we knew who the teams were going to be,” said Scott Glaser, in his third year as the bowl’s executive director. “Did I think it would sell out as quickly as it did? No. I thought we would have a sold out the lower bowl and then we would move into the upper levels.”

Instead, with each of the roughly 65,000 seats sold, Glaser noted arrangements were being made to have standing room tickets at Raymond James Stadium available by the end of this week.

Not many bowls sell out these days. Sure, those affiliated with the College Football Playoff and a few others are filled to capacity. But that’s about it. The Gasparilla Bowl, first played in 2008 and which has primary agreements with the SEC, ACC and American, sold out for the first time.

The obvious appeal with this year’s game, which will kick off at 7 p.m. on December 23, is an in-state matchup between teams with players who competed with or against each other in youth leagues and high school.

“To be able to have these two teams play in this game is outstanding,” said Glaser.

It is a matchup between what is typically an SEC power and a program that has been at or near the top of the Group of Five in recent years. (UCF will join the Big 12 no later than 2024, possibly 2023.)

Of course, had Florida, which entered October No. 10 in the AP poll, continued to win and not find itself needing to defeat Florida State in the regular season finale to become bowl eligible, then the Gators, under interim coach Greg Knox, would not be preparing to play UCF. Alas, a number of things aligned nicely for the bowl.

“When you start looking at teams and who our primary agreements are with, you hope you get great teams that just didn’t have as good as seasons as they wanted,” said Glaser. “If both teams won a couple of more games, they would have received an invite to a different bowl.”

A benefit of having both teams playing in Tampa is that nobody has to get on a plane. Florida and UCF are within a couple of hours’ drive of the city, which is home to plenty of alumni from both schools. According to the Tampa Gator Club, an affiliate of the University of Florida Alumni Association, more than 20,000 alumni are in the region. UCF’s alumni association also have a notable presence in Tampa.

Because the teams do not have to bother with air travel, everybody can be home for Christmas if desired.

“The game is two days before Christmas and just enough time to allow people to get here, enjoy the game, and get back to their families for Christmas Eve and Christmas Day,” said Glaser.

No small detail is that tickets were $15 to $70, a pricing structure that suited just about anybody who wanted to attend.

“Part of our mission is to be affordable,” said Glaser. “We are trying to build an experience in which people want to come back every year. We don’t know if we get Florida and UCF every year. So we need to try to make sure people who went to the game for $15 or $30 had a great time and the next year, when we get two different teams, local fans who enjoyed themselves will want to attend again.”

It is a far cry from Gasparilla Bowl games of years past. Attendance will double the bowl’s previous mark, which was set in 2019 when an announced crowd of 33,539 saw UCF defeat Marshall. That was the second Gasparilla Bowl played at Raymond James Stadium with the first taking place in 2018 between USF and Marshall.

The first 10 bowl games, under various sponsors, were played across the bay at St. Petersburg’s Tropicana Field and in front of announced crowds as little as 14,000. The 2017 matchup between Temple and FIU was the first with the name “Gasparilla,” a nod to the pirate, Jose Gaspar, and the many annual events in the bay area that celebrate his legend.

“For us, as a bowl, we have had our ups and downs,” said Glaser. “Even before we selected the teams, we said this is the year, coming out of Covid, that we have to figure out a way to relaunch and rebrand. We need to tell Tampa Bay what the Gasparilla Bowl is and let them know what we are about and the type of an event we can put on. To have the opportunity to invite these two teams just amplifies that message.”

Though the bowl, an ESPN Events production, will have plenty of local and regional appeal, there should be ample national interest as well. A packed venue and a prime-time slot on an evening when there are no other bowl games should only provide more energy and anticipation leading up to kick off.

“From a corporate perspective, sponsors, ESPN and the Gasparilla Bowl, that’s what you want,” said Glaser.