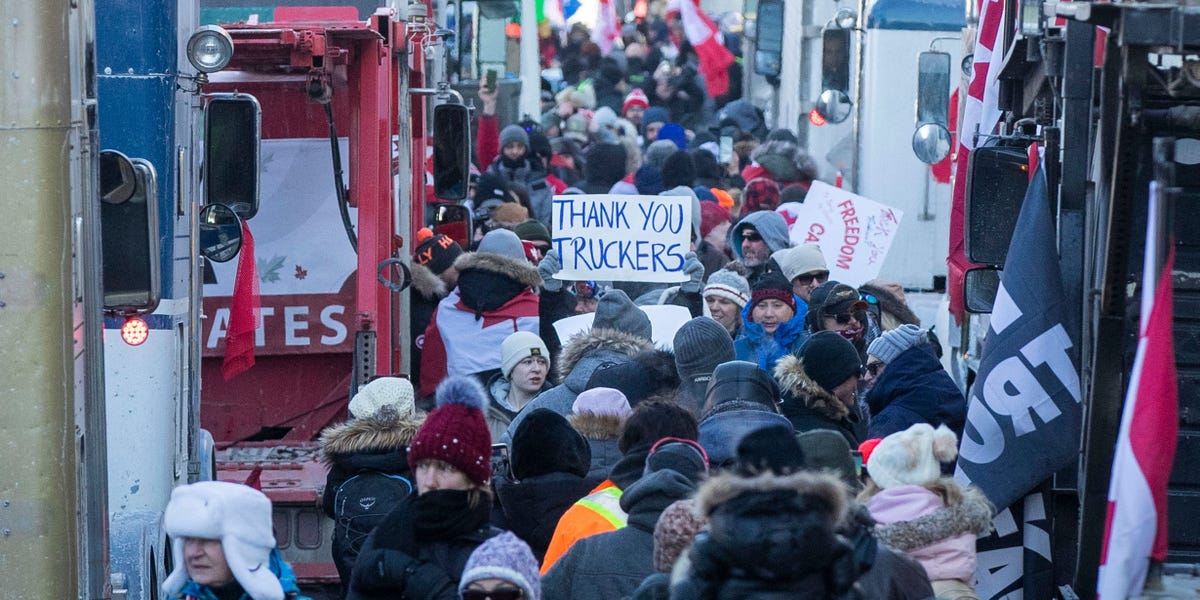 Police said they are “turning up the heat” on the Freedom Convoy protest in Canada’s capital.

Ottawa police said on Monday that they seized thousands of liters of fuel, as well as a full oil tanker, from a camp in the parking lot of a baseball stadium where about 500 trucks had assembled as a part of the protest against Canada’s cross-border vaccine mandates for truckers.

Ottawa police also arrested over 20 people they alleged were involved in the protest and launched 60 criminal investigations into incidents, including “the desecration of the National War Memorial,” as well as the appearance of Nazi and Confederate flags. The police issued over 500 tickets to protesters on charges ranging from noise complaints related to frequent honking and fireworks demonstrations to public intoxication and have warned people that they could be arrested for bringing food and fuel to the protesters, according to a report from The Wall Street Journal.

A spokesperson for Freedom Convoy did not respond to a request for comment from Insider. Though a protester said in a popular video on the group’s Facebook page that “police are getting desperate” and “handing out silly tickets” for things like honking.

On Monday, a Canadian judge banned protesters from honking their horns excessively or blowing airhorns for the next 10 days. The ban was in response to a class-action lawsuit brought on behalf of downtown Ottawa residents and came a day after the mayor declared a state of emergency.

Thousands of truckers and supporters have been protesting Canada’s cross-border vaccine mandate for essential workers in Ottawa since truckers began traveling to the capital in large convoys on January 24. Canada’s vaccine mandate for truckers went into effect on January 15. The new rules require US truckers to present proof of vaccination to cross the border and unvaccinated Canadian truckers to get a COVID-19 test and quarantine when they reenter from the US. The US imposed a similar mandate on January 22.

Many protesters have made make-shift communities in downtown Ottawa. The Washington Post reported that protesters had erected a community kitchen, portable saunas and hot tubs, and even bouncy castles for children.

The group raised over $10 million in donations on GoFundMe, through support on social media from several US political figures, including Former President Donald Trump, Rep. Marjorie Taylor Greene (R-GA), and Ben Shapiro. Though, GoFundMe said on Saturday that the funds would be returned to donors, as the fundraiser was in violations of its terms of services. Since, Freedom Convoy has pivoted to the Christian donation platform GiveSendGo and raised nearly $5 million.

“We are turning up the heat every way we possibly can,” Ottawa Police Chief Peter Sloly said in a press conference on Monday. “Every time we knock something down, there are attempts for it to pop up in four or five other locations,” he added.

Sloly said that police fear the demonstrators could use their vehicles as weapons against them and that some protesters might be armed. The Journal reported that videos have emerged on social media showing protesters yelling at the officers, with at least two of them carrying rifles.

“The occupation has turned into an aggressive and hateful occupation of our neighborhoods,” Ottawa Mayor Jim Watson wrote in a letter to Prime Minister Justin Trudeau calling for police reinforcements. “People are living in fear and are terrified.”

How Oil And Gas Is Being Affected By Climate Change –...