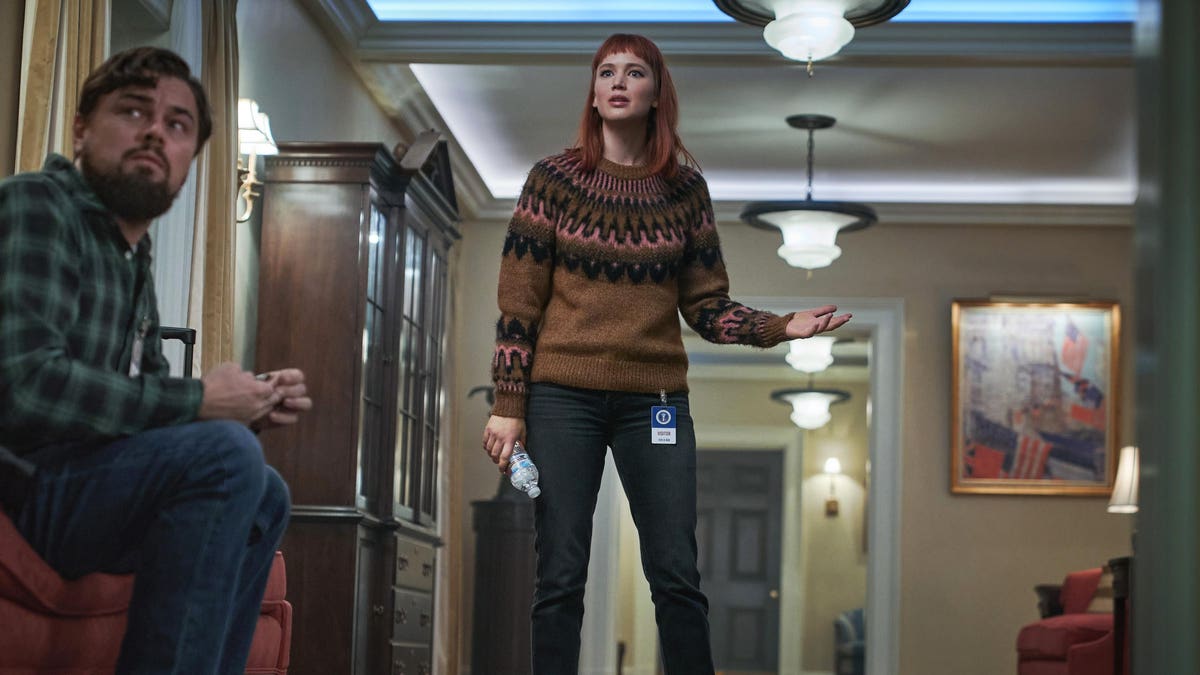 Netflix has a new number one hit, unseating one of its most popular series ever, The Witcher, just under a week since its release. That would be its original film Don’t Look Up, which uses the power of actors with something like 50 Oscar nominations between them to draw in mass audiences over the holiday.

Don’t Look Up is from comic genius Adam McKay, responsible in some form for a parade of classics ranging from Succession to Anchorman over the past two decades, and now he’s trying to send a message using the power of every star he’s attracted to him.

I am not going to call the strong climate change message of Don’t Look Up “political,” as that’s about as accurate as saying the movie’s asteroid is “political,” but that’s kind of the main point. In the story, scientists Leonardo DiCaprio and Jennifer Lawrence grow increasingly frustrated as the government, the media and the public ignore their warnings that a giant comet is definitely going to hit earth, right up until the moment that…it hits earth. I mean, spoilers, I guess, but that’s kind of the point. Mass idiocy leads to disastrous inevitability, and mass death.

Some are calling this the Idiocracy of the modern era, but I think that’s a little too generous. Despite the stellar cast (I especially liked Jennifer Lawrence in this), Don’t Look Up is more or less the same joke told over and over and over again for well over two hours. Sometimes in ways that don’t really make a ton of sense as satire.

Politicians are roasted (I believe Meryl Streep’s president is supposed to be a Democrat?) as it’s said that they’re only focusing on the problem when it’s politically expedient.

The tech industry is roasted (Mark Rylance appears to be playing some crossbreed of Steve Jobs and his metaverse-building character from Ready Player One) as their profit-based solutions to the problem fail spectacularly.

The media is roasted (embodied by a “fun” news show hosted by Tyler Perry and Cate Blanchett) by not taking the problem seriously enough, and even the New York Times is dragged for not covering the issue past the bare minimum.

The public is roasted in probably the least subtle exercise of the film, as a political message becomes “don’t look up,” a literal head-in-the-sand position (printed on hats!) that ignores science, and seems actually more relevant to the current Covid conspiracies, rather than climate change.

Hell, even the scientists are roasted, as Leo’s character gets a big head once he becomes famous. If he’s supposed to be Al Gore somehow, it’s a pretty brutal takedown for no real reason.

But again, it’s all the same joke. Everyone is ignoring science at their own peril, and it’s almost certainly too late to act on the unavoidable issue that will destroy the planet and kill millions. It’s not that the points the film is making are incorrect. Climate change isn’t given the attention it’s due, and it is extremely late in the game to make any meaningful changes, but as a movie, I’m just not sure how well this works, and I feel like Idiocracy did a better job with a similar concept, even being much “wackier” than what we’re seeing here.

My guess is the message that the film is trying to convey will fly over the heads of the people it’s actively making fun of, which makes the whole experience a bit condescending from start to finish. And it will frustrate some of those who are taking action, journalists or politicians who have tried to taken meaningful steps on the issue, as it acts like no one is ever doing anything.

There are some good jokes in here to be sure. I find the goofier the movie gets, the more it works (I especially liked Jonah Hill’s Chief of Staff/first son role), but it’s too long, and makes the same point too many times. Dozens of times. It’s essentially the first meeting with the president you see in the trailer played on a loop for another two hours, and it only occasionally lands properly after that.

Is it worth a watch? Maybe, just for the star power alone, but don’t come away expecting anything much deeper. If you already know climate change is bad and science is good, I suppose you may enjoy seeing people who do not believe that get made fun of. If you do not believe science is good, you will just get mad at “Hollywood liberals” talking down to you like they always do and aren’t going to change your mind on anything. Or you may just get through the whole thing without thinking about the allegory at all. Don’t Look Up reminds me less of Idiocracy and more of Ricky Gervais’ The Invention of Lying, a brutal takedown of organized religion that again, even if you agree with the core message, comes across as rather annoying and condescending all the same.

A YouTuber went to an unclaimed baggage store and bought replacements...

Ex-Trump advisor Peter Navarro said he was put in handcuffs and...