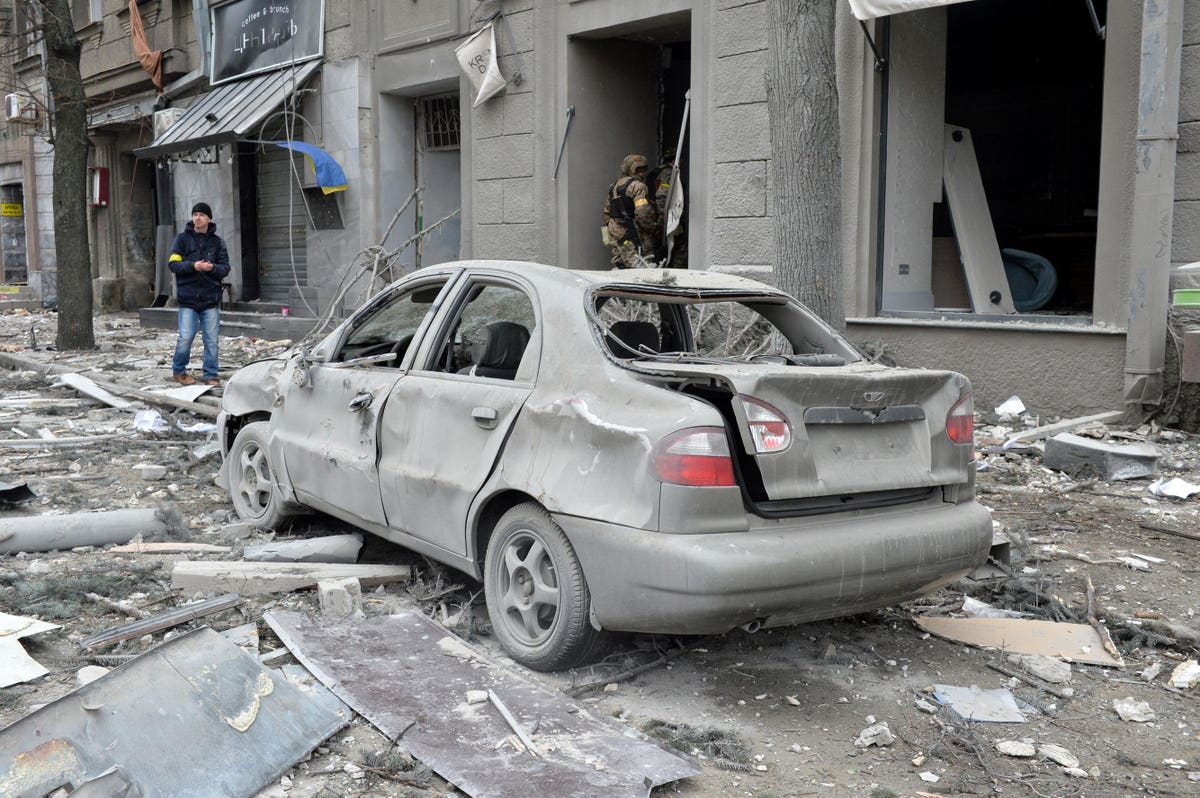 President Joe Biden is set to address Russia’s invasion of Ukraine during his State of the Union Address on Tuesday, calling the attacks “premeditated and unprovoked.” Biden will say Russian President Vladimir Putin failed to divide Americans and dodge retaliation from the West and NATO.

“When dictators do not pay a price for their aggression, they cause more chaos,” an advance excerpt of his State of the Union address says. “That’s why the NATO Alliance was created to secure peace and stability in Europe after World War 2.”

Last week, Biden reiterated the U.S. would defend NATO allies and territories, but he would not send troops to Ukraine.

Russian President Vladimir Putin signed a decree Tuesday limiting the withdrawal of foreign currency in the country, the Kremlin said in a statement to Reuters. Putin’s decree bans the export of foreign currency valued at more than $10,000 starting Wednesday.

Forbes Ukraine reports Putin may be attempting to keep as much money as possible within Russia after several countries levied massive sanctions against Russia’s economy, Russian officials, including Putin himself, and members of elite families in the country. The Russian ruble plunged following the sanctions, CNBC reports.

The move comes one day after Putin banned Russians from withdrawing foreign currency from their accounts in foreign banks.

Britain launched its first round sanctions against Belarusian officials and organizations Tuesday in response to the country’s support of Russia’s invasion of Ukraine.

“The Lukashenko regime actively aids and abets Russia’s illegal invasion of Ukraine and will be made to feel the economic consequences for its support for Putin,” British Foreign Secretary Liz Truss wrote Tuesday in a release announcing the sanctions. “We are inflicting economic pain on Putin and those closest to him.”

The sanctions target Victor Gulevich, Belarus’ chief of the general staff in charge of directing the Belarusian armed forces, along with three other deputy defense ministers, and two military enterprises believed to have played a part in the invasion.

The European Union aims to impose more sanctions on Belarus this week, Reuters reported Monday, targeting oligarchs and exports. It also plans to cut Belarusian banks off from the financial messaging system SWIFT, as it did with Russian banks in recent days, an EU official told Reuters.

Russian, Belarusian Tennis Players Can Still Compete–But Not Under Their Countries’ Flags

Russian and Belarusian tennis players can still participate in pro tour events, but cannot compete under their countries’ flags, according to a joint statement from the sport’s international governing bodies. Read more about the ruling from the International Tennis Federation, Association of Tennis Professionals, Women’s Tennis Association and the four Grand Slam tournaments here.

Meta, the parent company of Facebook, said Tuesday it has stopped recommending content from Russian state-sponsored media companies, as well as posts with links to the organizations, multiple news outlets report.

Nick Clegg, Meta’s president of global affairs, said the company is “making them harder to find across our platforms” by demoting Russian controlled media outlets on the main Facebook feed and no longer algorithmically recommending the posts across the social network. Instagram is in the process of blocking recommendations to the media organizations globally, according to Instagram executives.

Last week, the Russian government restricted access to Facebook in the country, amid a wave of protests over its invasion of Ukraine.

Meta had said on Monday it would restrict access to Russian news outlets RT and Sputnik on its platforms across the European Union, joining a number of companies taking action amid the invasion.

Ukrainian President Volodymyr Zelensky said Russia must stop bombing Ukrainian cities before he will agree to additional ceasefire negotiations, after the first round of talks made little progress. “It’s necessary to at least stop bombing people, just stop the bombing and then sit down at the negotiating table,” Zelensky said in a joint interview with Reuters and CNN. Earlier on Tuesday, a Russian missile struck a TV tower in Kyiv.

Zelensky also called for NATO allies to implement a no fly zone to stop the Russian air force—a move President Joe Biden already personally conveyed was currently off the table, according to Zelensky. A no-fly zone from NATO countries is extremely unlikely, as it would involve direct conflict with Russian aircraft. “To put in a no fly zone is to go to war,” Olga Oliker, the International Crisis Group’s director for Europe and Central Asia, told Vox.

Zelensky also urged Biden to make a “useful” message about the invasion during his State of the Union speech Tuesday evening.

As Russian forces maneuver to encircle the Ukrainian capital of Kyiv, their advance on the city has been slowed by logistical problems, a senior U.S. defense official told reporters Tuesday.

Russian forces have grappled with food and gasoline shortages, according to the official. Plus, the Pentagon has seen evidence that morale among Russian military personnel—many of whom are conscripts—is flagging: Many troops entered Ukraine with little training and preparation, some appeared to be unaware that they were embarking on a combat operation and surrenders have been reported in certain cases, the official said. Russian personnel have also been relatively risk-averse and Ukraine is putting up resistance.

A convoy of Russian vehicles north of Kyiv stretches for about 40 miles, satellite company Maxar Technologies said Monday evening, but the U.S. defense official said Tuesday that convoy “doesn’t appear to be making a lot of progress.”

Meanwhile, Russia has mounted frequent aerial attacks on Ukraine, with more than 400 missiles launched since the start of the invasion, according to the U.S. official. Ukrainian officials said Monday that Russian forces had used a thermobaric “vacuum bomb,” which spreads a fuel cloud that when ignited sucks up surrounding oxygen to create a massive destructive blast—an act White House Press Secretary Jen Psaki told reporters Monday could “potentially be a war crime.” The senior U.S. defense official said Russia has deployed into Ukraine rocket launchers that could be used for thermobaric weapons, but didn’t confirm the weapons have been used.

Russian forces targeted Kyiv TV Tower with a missile Tuesday, the Ukrainian parliament’s Twitter account said. The New York Times verified videos of the strike circulating on Twitter and Telegram, showing a loud and fiery blast and the tower in smoke.

Shortly before the strike on the tower, the Russian defense ministry said Russia planned to target Ukrainian communication facilities with “high-precision weapons,” aiming to cut off Ukraine’s information capabilities.

SpaceX CEO Elon Musk said Saturday he activated Starlink in Ukraine and sent user terminals to the country to combat internet outages reported throughout Ukraine. Musk, the richest man in the world according to Forbes, announced the move on Twitter in response to a plea from Mykhailo Fedorov, Ukraine’s deputy prime minister. Federov posted on Telegram on Tuesday that the first batch of Starlink user terminals arrived in Ukraine, sharing an image of the small satellites.

Musk’s announcement was met with widespread praise, but skepticism of how effective Starlink would actually be in Ukraine followed. Brian Weeden, a space operations and policy analyst at the Secure World Foundation, told The Atlantic Starlink may not make a “meaningful impact right away” in the country. There are also concerns about SpaceX’s service working during a war: Starlink has “never really been tested in a context of battle,” said John Scott-Railton, a security researcher at the University of Toronto, to The Atlantic.

President Zelensky Given Standing Ovation As He Addresses European Parliament

Ukrainian President Volodymyr Zelenksy was given a standing ovation by members of the European Parliament after giving an address Tuesday morning.

Ukraine has long chosen Europe, and now is the time for Europe to choose Ukraine, Zelnsky said, Forbes Ukraine reports.

Zelensky, whose leadership during Russia’s invasion has been lauded as heroic in his country and across the West, renewed calls for Ukraine to join the European Union and on Monday signed an application to join the bloc.

“Nobody will break us, because we are Ukrainians,” the BBC also reported Zelensky as saying.

Ice skaters from Russian and Belarus have been banned from taking part in all international competitions with immediate effect, the International Skating Union (ISU) announced on Tuesday.

“It’ll take time for our systems to fully ramp up. Our teams continue to monitor the situation around the clock to take swift action,” the company said.

Global payments firms Mastercard and Visa blocked a number of Russian financial institutions targeted by sanctions from their networks, in compliance with Western sanctions, the companies announced Monday and Tuesday.

Maersk, one of the world’s biggest shipping lines, has suspended deliveries to and from Russia apart from food, medical and humanitarian supplies, citing the impact of sanctions.

The company said in an emailed statement to Forbes: “As the stability and safety of our operations is already being directly and indirectly impacted by sanctions, new Maersk bookings to and from Russia will be temporarily suspended.”

It added that it’s already seeing delays to global supply chains as sanctions take place, the “detention of cargo by customs” across shipping hubs and “unpredictable operational impacts.”

Maersk, headquartered in Denmark, says it has been operating in Russia since 1992 and in ports and offices across the country, from Moscow in the west to Vladivostok in the east.

Earlier on Tuesday, Belarusian leader Alexander Lukashenko said that his country has no plans to join Russia’s military operation in Ukraine, despite allowing its territory to be used as a launch pad for the northern flank of Russia’s invasion.

At Least 70 Ukrainian Soldiers Killed In Russian Strike On Okhtyrka

More than 70 Ukrainian soldiers were killed by a Russian rocket attack in the city of Okhtyrka on Tuesday, regional head Dmytro Zhyvytskyy revealed on Telegram.

Zhyvytskyy shared photos of a charred and demolished four-story building in Okhtyrka—located between the western city of Kharkiv and the capital Kyiv—which was reportedly a base of operations for the soldiers.

Okhtyrka mayor Pavlo Kuzmenko accused Russia of “waging a vile war” and dropping a fuel-air bomb on an oil depot, the Guardian reported.

Be Resolute To Reduce That Nighttime Artificial Light Pollution, Which AI...

Scribe Joby Harold On Bringing Back Ewan And Hayden, The Best...