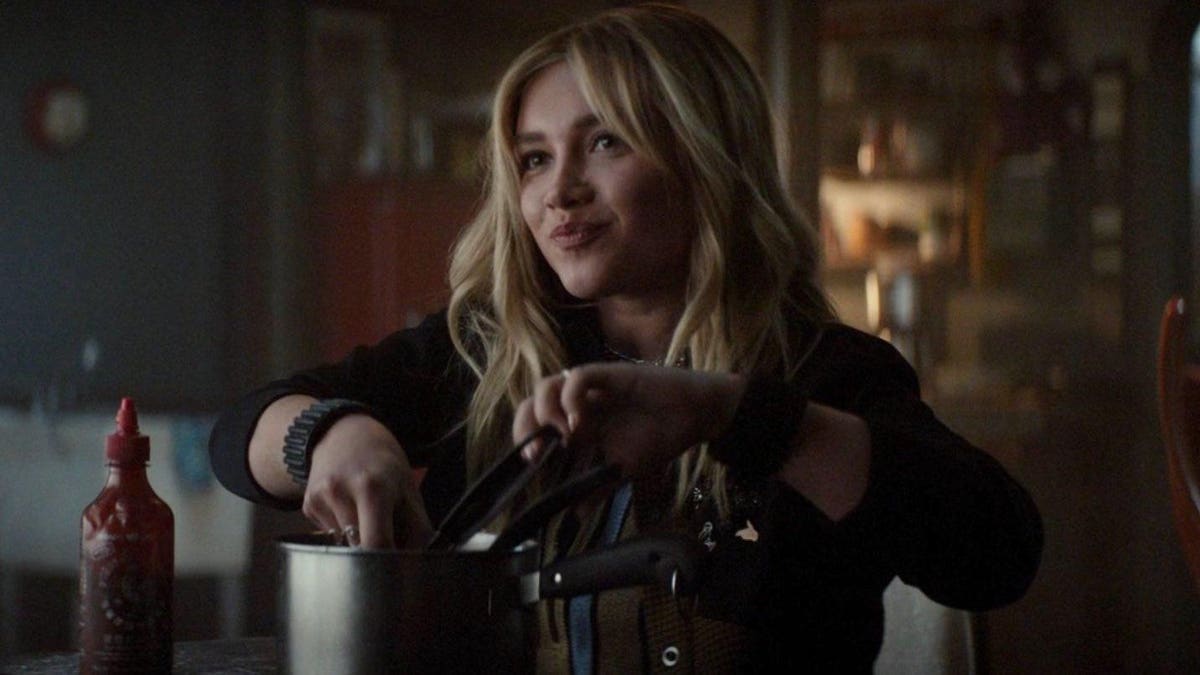 Well, if you needed more evidence that the future of Hawkeye as a series should probably evolve to include a Kate Bishop and Yelena Belova team-up, look no further than today’s episode which dedicates practically half its running time to a single conversation between the two. Spoilers follow.

Today’s episode gave us an “in-between” intro, something bridging the gap between Black Widow (the movie) and Hawkeye (the show), indicating what happened to Yelena in the interim. In it, we see that Yelena was snapped and when she returned, her first thought was finding her sister, who had of course died in order to help bring her and everyone else back. Then, chronologically, we get the post-credits scene in Black Widow with Contessa Valentina at her grave, where she’s given Hawkeye as her target.

We see Yelena in non-combat mode in Hawkeye today, breaking into Kate’s old apartment and helping herself to some mac and cheese. Kate and her banter about New York for a very long time, and it’s easy to see what the directors meant when they said Hailee Steinfeld and Florence Pugh had great chemistry together, as I’d watch an entire series of them just talking about things over box mac and cheese.

The very end of the conversation turns serious as Yelena explains she’s there to kill Clint, but when Kate learns it’s not just revenge, it’s a job, she tells Yelena to question who her employer is, which she does.

This gets into…odd territory. We do not go back and find the Contessa again, who seems to be working as a middleman for other entities. Rather, Yelena finds out that it’s actually Eleanor Bishop, Kate’s mother, who has hired her, and she is in cahoots with, you guessed it…Kingpin.

At long last, we have audio and visual confirmation that yes, Hawkeye has indeed been building up to a Kingpin reveal, and it is Vincent D’Onofrio’s Netflix Daredevil version, not some new iteration. There have been roughly ten million hints this was going to happen, including some from the actor himself, but now it’s finally confirmed, and presumably, we’ll actually see him in person and not in a blurry phone photo next week for the finale.

I am trying to puzzle out Eleanor Bishop’s involvement here. It’s possible Hawkeye pulled a bait and switch on us with Jack. In the comics, Jacques Duquesne is indeed very much a villain, the Swordsman, but while I suppose it’s possible he and Eleanor are both working together, maybe what he said was correct, that he was framed…by Eleanor, with the use of this shell company. But why are Kingpin and Eleanor working together? What exactly is motivating Eleanor with any of this? My first thought was that she wanted to kill Clint so he’d stay away from her daughter, but this seems like it was in the works long before they’d even met. And what’s the deal with this watch?

Also this week, we got essentially what will be the set-up for the Echo show, as Echo learns it was Kingpin who used Kazi to tip off Ronin to her father’s location, so she will then blame him for his death, and it makes sense that we’ve heard that “Daredevil characters” will be a big part of the Echo show, no doubt including Kingpin himself.

But again, all of these leads back to my inescapable conclusion: We must see Kate and Yelena team-up for a new show or movie or something. Too much chemistry to waste there. Plus, it’s impossible to imagine how all of this will be fully wrapped up in one more episode next week.

‘Kevin McCarthy will sell his mother’s soul in order to protect...

Legendary stock-picker Peter Lynch warns against passive investing — after ‘The...