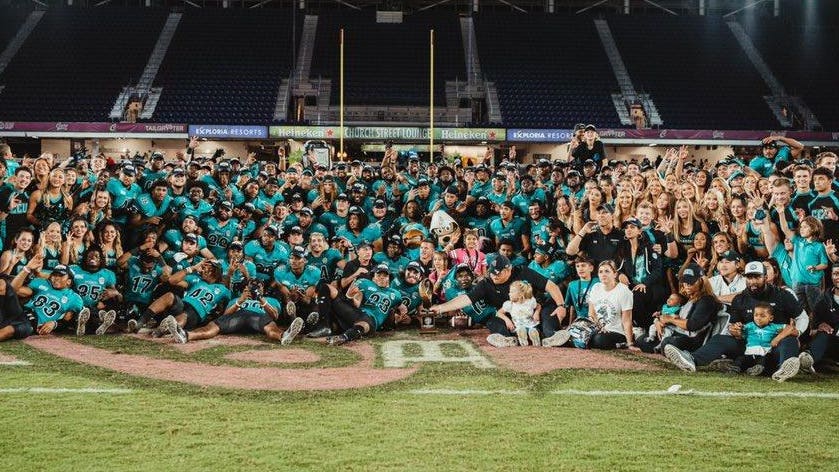 Jamey Chadwell held up a black visor with the Chanticleers’ logo. It was not that long ago that the average fan would have struggled to match the university with the logo, but it is a logo that is becoming more and more familiar on a national scale.

That was the point Chadwell made as he clutched the visor during a press conference that followed Coastal Carolina’s thrill-a-minute 47-41 win over Northern Illinois in last Friday’s Cure Bowl, a game played at Orlando’s Exploria Stadium.

“That’s a brand nationally now,” said the coach, pointing at the logo. “Everybody knows what a chanticleer is. Three years ago, four years ago, maybe not as much, but now everybody knows what it is. The senior class and our football program has been a big part of why this is recognized and I am thankful to be a part of it.”

The Chanticleers were a fun story in 2020 when the proper pronunciation and history of the school’s nickname were well referenced. While a few conferences delayed the start of their respective seasons by several weeks due to the pandemic, the Sun Belt roared out of the gate the second Saturday in September. Before long, Coastal Carolina was the darling of a disrupted college football season.

The Chanticleers received much national attention while winning all 11 regular-season games, making their initial appearance in the top 25 and ascending to No. 9 in the AP poll. Though the conference championship game with Louisiana was canceled due to the virus, there was an opportunity to finish the season 12-0.

Chadwell’s team had to settle for 11-1, though, losing in overtime against Liberty in last year’s Cure Bowl. This time around in Orlando, there was unfinished business to tend to.

Trailing the Huskies by eight with less than 10 minutes remaining, the Chanticleers scored the final 14 points and held on during a frantic finish to secure the program’s first-ever bowl victory.

“To come up short last year in this game and then have the opportunity, when it looked like (the game was going NIU’s way), to find a way to win says a lot about their character and who they are,” said Chadwell, of his team. “I am proud to be their head coach.”

Chadwell, a quarterback at East Tennessee State in the late 1990s, arrived in Conway in 2017 to serve as offensive coordinator under Joe Moglia. It was Moglia, whose career on and away from the gridiron has been well documented, who spearheaded the program’s transition from the Football Championship Subdivision to the Football Bowl Subdivision.

As it turned out, Chadwell spent the 2017 season as the interim head coach as well as OC when Moglia was on medical leave. What ensued was an injury-riddled 3-9 season that was the Chanticleers’ first as an FBS program. Chadwell was the OC and associate head coach under Moglia, back on the sideline, in 2018 when CCU improved to 5-7.

Moglia became the athletic department’s chair in 2019 with Chadwell taking over the team once again and without the interim label. The season resulted in another 5-7 mark, though this one had a different feel as four losses were by seven points or less. The larger picture revealed the program was unquestionably on the rise.

“Any time you follow somebody that has been highly successful, that’s a challenge because there are certain expectations,” said Chadwell. “What I learned about that, through that time, is that you have to be who you are, your personality has to be who you are and how you want to operate the program.”

The program has operated to the point that the Chanticleers won 22 of 25 games the past two seasons. The three losses were by a total of eight points.

“The special thing about these last couple of years, even 2017 as bad as it was, is the coaches that have been a part of it,” said Chadwell. “We have been together a long time and to build a program together and build it to the level that it is means a lot to me because we were nobodies. ‘You’ve never been at this level. You can’t win.’ We heard that all the time. The coaches believed in each other and what we do. To see the rewards of their hard work means a lot.”

Capping his career with a bowl win meant a lot to linebacker Silas Kelly, who was one of six players that had been with the program since 2016, a year before Chadwell arrived. Seeing how a group of players and a coaching staff grew together through the FCS/FBS transition, and to cap it off with a bowl win, was a priceless experience.

“It’s special and I have a ton of fond memories,” said Kelly, of a career that went from losing nine straight games during his redshirt freshman season of 2017 to hoisting a bowl trophy after, fittingly, recording a game-high and career-high 14 tackles. “We are happy that we could go out and win the game for everybody that is a part of Coastal. All the players, the coaches, support staff, cheerleaders, fans, everybody. First bowl win in school history. That is special for us to have, to achieve, and we are happy to do it for coach Chadwell. We love him for how he leads this program. I am so proud of this team. It is special to know where we started, where we began and to see how far we have come.”

Quarterback Grayson McCall, whose pass efficiency rating of 207.6 bested the single-season mark set last year by Alabama’s Mac Jones (203.1), threw three touchdown passes in the bowl win. It was a victory the redshirt sophomore wanted for the seniors

“We got the opportunity to come to the Cure Bowl last year and didn’t get to finish it off the way we wanted to,” said the two-time Sun Belt Conference player of the year. “It is great to send the seniors off, Silas, and the guys that got us to this point. There is no better feeling than being able to send them off on the high note.”

Coastal Carolina, the university, received attention in 2016 when the baseball team won the College World Series. It sent the spotlight in the direction of an athletics program, led by Matt Hogue, that was about to become all the more recognized with the football program transitioning to the FBS.

Of course, as Chadwell noted, there were the naysayers when it came to elevating to the highest level of college football. There always are, though the people that made it happen matter most. And they have been rewarded.

The best Champagne, Prosecco, Cava, and other sparkling wines for any...