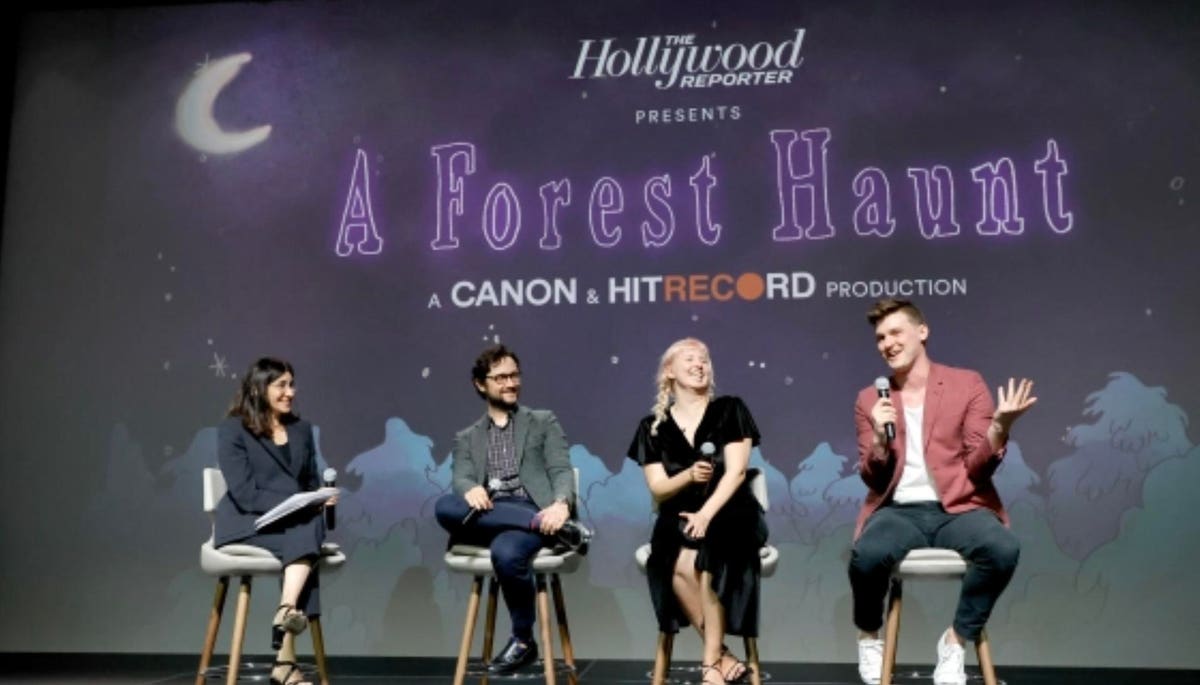 A charming animated short commissioned by Canon from Joseph Gordon-Levitt’s production company/creative community HitRecord.com is an unlikely but effective demonstration of the practical potential the new AMLOS system of smart cameras and software, which were created to make the hybrid meetings of the future far more effective and collaborative.

A Forest Haunt debuted recently in a screening at the Ross House, a sprawling and sleek home/film sound-editing studio/live-performance stage perched on a steep Laurel Canyon hillside high above Hollywood

The AMLOS system is unusual, and perhaps unusually powerful compared to competing conferencing systems, because it marries Canon-designed cameras with smart software.

Kohei Maeda, the Canon new-business development advisor credited with devising AMLOS, said he was inspired by his years in Canon’s printer division, where the products are something “to help people share their ideas…with as many people as possible. I realized that that’s how we can utilize the imaging technology, to help people to collaborate together.”

The pandemic-forced shift to video-based remote meetings ran up against all kinds of limits, especially when it came to sharing large presentations or graphics that bumped up against corporate file-size limitations, Maeda said.

AMLOS stands for Activate My Line of Sight. Maeda designed it to improve the experience and effectiveness of hybrid in-person and remote conferences. It allows presenters to work with whiteboards, drawings and similar large images, then quickly capture and share those with remote participants.

The system software allows each AMLOS camera to focus on whomever is speaking in the room, but also to understand a small vocabulary of hand signals to control what the camera looks at while the speaker talks. That vocabulary of signals includes zoom-in and zoom-out, and “capture” (taking a screen grab, initiated by curling a hand into a “C” shape).

The system is built around Canon’s 4K-resolution PTZ cameras, which are set in flexible mounts that allow them to pivot and move up and down. The accompanying software is, so far, optimized for Microsoft’s MSFT Teams, and is Windows-only, though Maeda said his organization is creating software interfaces for other companies’ collaboration software.

Gordon-Levitt and HitRecord won two Interactive Emmys from the TV Academy for previous collaborative projects that relied on web- and browser-based tools. So, the AMLOS system promised to further boost that ingrained reflex toward working with creators wherever they are, Gordon-Levitt said.

“This is a system they built for collaboration,” Gordon-Levitt said. “And that’s the premise of the HitRecord community. People on HitRecord aren’t just posting their own art as isolated individuals and saying, ‘Hey, world, look at what I’ve made.’ The whole point of HitRecord is, ‘Hey, let’s make things together.’ So when when Canon approached us, and said, ‘We have this new system that’s all about facilitating remote collaboration,’ we’re like, ‘Well, that’s what we have always done.’”

As Gordon-Levitt noted, the pandemic lockdown, #WorkFromHome and related workplace shifts have mean “remote collaboration has been really thrust into the foreground.”

“It just makes it fluid,” Gordon-Levitt said. “I’ve briefly used digital whiteboard solutions before and found them kind of cumbersome, so I gave up. They were not really solutions yet in my experience, whereas this allowed us to actually just use a good old-fashioned whiteboard but make it easily viewable to everyone in the remote workspace.”

And A Forest Haunt involved a lot of people. The credit list for the film, which lasts all of about five minutes, includes more than 300 contributors who took part in nine story-development sessions over three days at the Consumer Electronics Show in January.

Gordon-Levitt acknowledged that, of those 300 or so contributors, “I think a lot of those folks were…it was lovely to have them kind of observing. And that was a really fun part of the creative process. I wouldn’t say that every one of those people contributed to the short film.”

But plenty of others did, building the story line and imagery of an impudent and independent forest sprite trying to scare off ax-wielding interlopers.

The project was then handed off to the same animators behind the Apple TV+ series Wolf Boy and the Everything Factory, including directors Edward Jesse and Toff Mazery and character designer Natalie Andrewson (Gordon-Levitt is an executive producer and lead voice actor in that show too).

The animators and HitRecord then embarked on an intense few months of work to get the project completed in time for its recent showcase at the Ross House, which is also home to the Laurel Canyon Live streaming service.

Gordon-Levitt said the ease of sharing and collaborating through a system such as AMLOS could make hybrid or remote writers rooms a lot more sustainable, even as Hollywood productions and other workplaces return to something close to pre-pandemic “normal.”

“Those little bits of friction just make for fatigue,” Gordon-Levitt said. “Whereas in a writers room where everyone’s sharing the physical space, generally you can work a whole day. But remote writers rooms, I think everybody tends to get tired more quickly. A lot of the reason for that is there’s little imperceptible bumps in the road to connecting with each other. And it just takes a toll on your energy level. Innovations like this, that just start smoothing out those bumps in the road, are what we need to get back to having all the advantages of being able to work remotely, because there are a ton of real advantages.”

Cathie Wood has ‘high conviction’ in bitcoin and ethereum but isn’t...