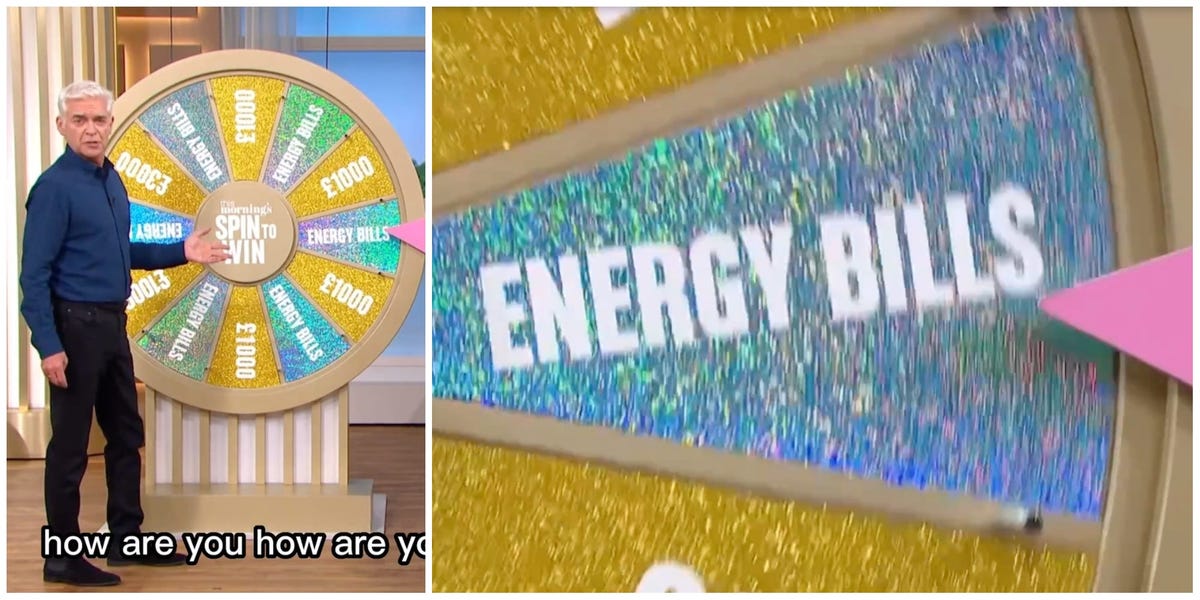 A “Wheel-of-Fortune”-style game on a British TV show offered to pay a caller’s energy bills as a top prize, in a startling illustration of how energy prices are hitting Europe and its neighbors.

Cheery daytime ITV programme “This Morning” offered either £3,000, £1000, and four months of “energy bills” on a spinning prize wheel on Monday.

In one clip posted to Twitter by TV critic Scott Bryan, an unidentified caller said his energy worries were “major” and his situation was “absolutely murder”, because he was using a pre-payment meter.

To his relief, the contestant won the energy bill prize.

What that’s worth will depend on the size of his home and how much power he uses. From October 1, when the price cap rises, an average household will pay £3,553 a year – an increase of 80%.

That comes on top of a 54% rise in April, with those on pre-payment plans, which are usually fitted in homes that have slipped into debt with their energy supplier,facing a larger hike.

The stunt shocked viewers, with Bryan commenting that the show has “turned completely dystopian”, comparing it to drama series Black Mirror.

ITV, the broadcaster of “This Morning,” did not immediately respond to a request for comment.

The October hike, which is expected to be dwarfed by increases in January and April 2023, is “like a dagger to the hearts of millions,”  the End Fuel Poverty Coalition said.

The campaigning group predicted that 42% of British household will enter fuel poverty this winter.

In a move widely suspected to be retribution for support of Ukraine, Russia’s state energy company Gazprom announced on September 2 that it would shut down the Nord Stream 1 gas pipeline— relied on by much of Europe — indefinitely.

Although the UK is theoretically less exposed than some of its European neighbors who are heavily reliant on Russia for energy, the country is steeling itself for a tough winter. The price per kilowatt hour of electricity has risen fivefold since last year, according to The New Statesman.

While the price increase is steeper still in France, President Emmanuel Macron’s government has opted to cover most of the cost directly, the magazine reported.

Meanwhile, it is still unclear what action the UK government will take to lessen the pain.

On Monday, members of the ruling Conservative Party elected former Foreign Secretary Liz Truss as party leader. She will formally take the reins as prime minister after meeting with the Queen on Tuesday.

Truss has refused to spell out exactly what steps she will take to address the crisis, although repeatedly rejected what she called “handouts” in favour of tax cuts. She is planning an emergency budget later in September.

However, the incoming leader is said to be considering a bills freeze funded by loans that would be underwritten by the Treasury.

‘The Last Of Us’ Series Premiere Recap And Review: ‘When You’re...