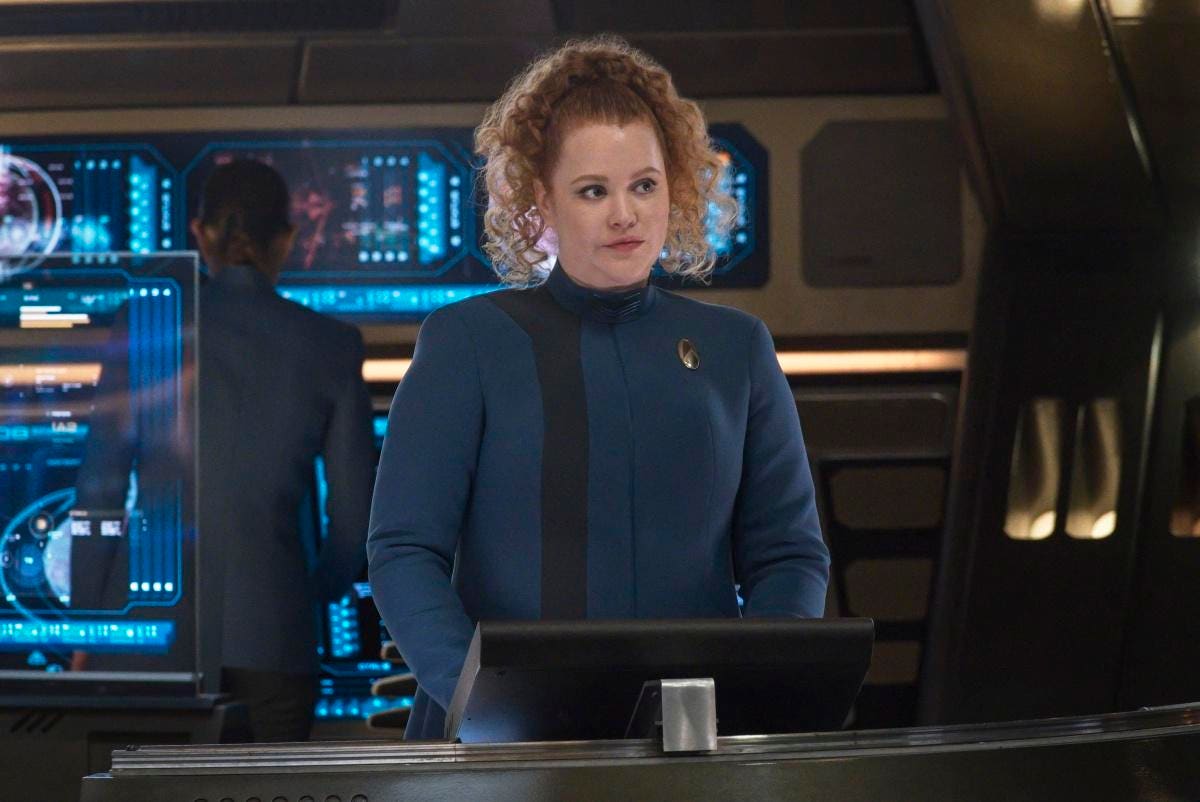 As if the headline isn’t enough of a spoiler, fans of Star Trek: Discovery are warned that this story reveals a major plot development from the conclusion of Thursday’s episode four of season four, “All Is Possible,” along with other details.

What a journey it’s been for actress Mary Wiseman, who has played Lt. Sylvia Tilly on Paramount+’s streaming series since her chatterbox character was a raw Starfleet cadet. That was back when Star Trek: Discovery premiered on CBS in September 2017.

When Wiseman spoke by phone Wednesday, the sweetness of her voice was the same as Tilly’s, but she exuded a calm maturity that her character is only now just beginning to express, as she steps away from the U.S.S. Discovery for a new challenge: Teaching at the newly relaunched Starfleet Academy of the 32nd century.

“Exactly,” she said. “Exactly.” But CBS says fans will be relieved to learn that Tilly will be back; This isn’t the end to her story. More about that shortly.

Fans have been following the breadcrumbs leading to this moment since the start of the season, and Wiseman confirmed that this change was the writers’ idea, not hers.

“It just felt like an organic outgrowth of the story, that she was in this sweet place of questioning, both her past and her motivations for the path that she was currently on,” said Wiseman. “That’s kind of what this character needed, some time to grow, on her own, as an adult. So it’s kind of a natural extension of that.”

Despite the fact that it’s part of a narrative arc, fans on social media sites have been speculating wildly for weeks about Wiseman possibly departing the series. Among the nonsense was that she was tired of having to contend with bodyshaming, something she discussed in a December 2020 interview, or because she is starting a family with her husband, Noah Averbach-Katz, who played Ryn the Andorian in season three.

Suffice to say, Wiseman said she didn’t care to comment on those rumors and that she and Averbach-Katz were “blissfully unaware” of all the innuendo. But she did recall that after that story broke a year ago, Star Trek: Voyager legend and now current vocal star of the new animated series, Star Trek: Prodigy, Kate Mulgrew, tweeted her support.

“It was a very cool moment in my life. Really,” she said of Mulgrew’s support. “Yeah, that was bad ass.”

Wiseman said she recently spoke with Star Trek: Deep Space Nine actress Nana Visitor for a book she’s written, due out in 2022 about the women of Star Trek, which Visitor told TrekMovie.com she hopes to turn into a documentary film.

“All the women of Star Trek are so supportive and incredible,” Wiseman said. And she has nothing but praise for series costume designer Gersha Phillips and the new uniforms she created for Tilly and her crewmates.

“It’s very comfortable,” she said. “I think they work on a lot of different bodies and they don’t feel, you know, gendered. And I think they’re just really, really a lovely evolution of where we are from, where we started. Gersha did amazing work on those.”

When Wiseman and the Discovery cast first met the press in 2017, there were questions on the red carpet about whether Tilly might be on the autism spectrum, which she addressed then, and again in this interview.

“I have no desire to disprove anything, particularly anything that makes somebody feel connected to the show or seen or represented by the show,” said Wiseman. “I’ve tried to remain clear that that’s not necessarily where I work from; I’m not trying to create that impression, but I’m pretty delighted that a lot of fans have connected with it on that level. That makes me feel very proud that I have been able to create a character that speaks to people in that way.”

Wiseman, a Julliard graduate, has also infused Tilly with humor, much of it physical. That was very much in evidence last week when the character was handed a sword for combat, and almost immediately dropped it on the floor. One red-headed fan on Twitter summed it up best: “We’re all Tilly dropping the sword.”

“I feel like, in my heart of hearts, like a clown,” she said. “So that stuff is always very funny to me. And so it’s something I always wanted to include, because that’s the kind of stuff that makes me laugh, like running the wrong direction down the hallway. We all love that Buster Keaton kind of stuff.”

Spoiler alert: Tilly goes from klutz to commander in this week’s episode, facing a dramatic challenge that requires her character to find the courage to once again step up and save the day.

“That was very cool, a very fun, writer’s challenge, to have to again rise to the mantle of leadership,” Wiseman said about their outdoor scenes in Toronto’s snowy winterland. “It’s definitely something that is super outside Tilly’s comfort zone, or something that at least feels to her to be outside of her comfort zone. And it’s something that feels outside of my comfort zone! Anytime that’s the case that’s happening is invigorating and exciting.”

Wiseman reflected on how her character’s growth accompanied the addition of two younger actors to the series in season three: Blu del Barrio and Ian Alexander.

“We were a very tight-knit family,” she said, “and then these two, much younger actors who are going through really big moments in their own lives, kind of entered the fray.” Like Wiseman, del Barrio and Alexander are members of the LGBTQ community, as are their costars Anthony Rapp, Wilson Cruz, Tig Notaro and Emily Coutts. Wiseman identifies as queer.

“And I think we all just kind of huddled around them, you know, and I like that that’s reflected in the story a bit, like this sense that when you’re older, you turn your attention towards guiding and nurturing the younger people, sort of like a mentorship model, which is definitely what my character, Tilly, also stepped into when she entered the show for the first time. So, now, to get to see her kind of mature into the mentorship role from the mentee role? That’s very exciting for me.”

Last year, Wiseman said her character was so unlike her real life persona that she might actually be closer to the Klingon warrior character of L’Rell, played by her longtime friend, Mary Chieffo, in the first two seasons. Incidentally, Chieffo came out as queer at Star Trek Day in September, and Wiseman said, “I’m just over the moon for her and her partner.” Rest assured, that story about Chieffo and her girlfriend is in the works!

What Wiseman has worked on over the year since that interview is growing, together, with Tilly.

“I do think that that’s happening, and that as I grow as a person, I also want her to grow, and then vice versa,” Wiseman said. “She shines light on parts of me that have atrophied. There’s just something about when you get to play a character this long, you reflect on them, and they reflect on you. It’s a very magical story.”

The Big Question: Does Tilly’s magical story have a happy ending?

Dawn Ennis: “Will Tilly be back? Can you talk about that?”

Mary Wiseman: “Well, what I can tell you is that Tilly will be back later this season. And I’ll just say, yes, you can include that.”

What else is next for Wiseman and her husband? She’s returning to the stage; Averbach-Katz is very active on social media, in particular about Star Trek and also support for those with type 1 diabetes… plus one other passion:

“Noah has a lot of stuff cooking vis-a-vis D&D [Dungeons and Dragons] with exciting announcements to come. I will say, stay tuned to his Twitter [@N_A_K] for all that stuff. And for me, I’m going to do a play this winter in New York, a very queer play, as a matter of fact: At The Wedding, at Lincoln Center. by a friend of mine,” Bryna Turner, whose show is a comedy. The world premiere on Feb. 28 follows previews that begin Feb. 12, 2022.

Why ‘Yellowstone’ is streaming on Peacock and airing on Paramount Network

The Dow just swung more than 1,000 points in a day. Here is what extreme volatility in stocks means for markets, according to experts.