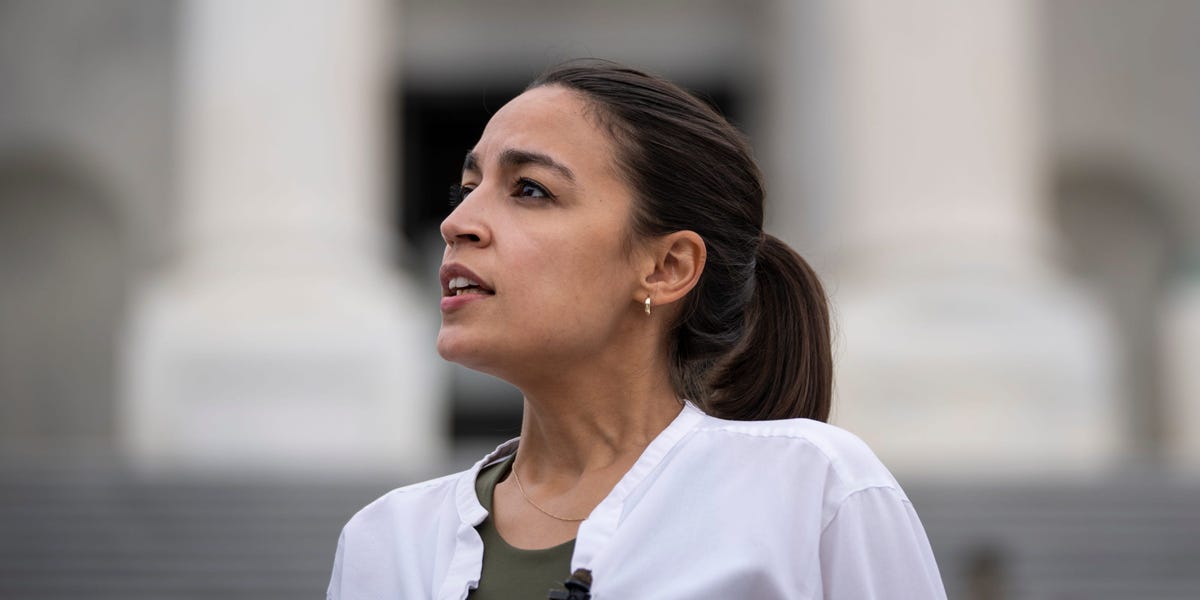 Rep. Alexandria Ocasio-Cortez on Monday called Sen. Joe Manchin’s abrupt rejection of the Democrats’ $2.2 trillion climate and social spending bill “an egregious breach of the trust of the president,” and said Democratic leadership in Congress should’ve done more to avoid this scenario.

Manchin surprised Biden and his Democratic colleagues by announcing during a Fox News interview on Sunday that he wouldn’t support the Build Back Better Act in its current form, potentially ending President Joe Biden’s most important legislative initiative. Ocasio-Cortez urged Democratic leaders in the Senate to force a vote on the bill and put more pressure on Manchin to find a way forward on some version of the legislation.

“Of course, we have every right to be furious with Joe Manchin, but it’s really up to leadership in the Democratic party, who made the decision to get us to this juncture,” she told MSNBC’s “Morning Joe.” “It’s really about time that we take the kid gloves off and we start using them to govern for working families in this country.”

Ocasio-Cortez and a handful of other House progressives voted against the bipartisan infrastructure bill Biden signed into law last month after Democratic leadership decided to uncouple it from the Build Back Better Act, appeasing Republicans and moderate Democrats who took issue with the larger social spending bill. The New York lawmaker blamed Democratic leadership for ignoring progressives’ warnings that moderates like Manchin needed to be strong-armed into a vote on the more sweeping legislation.

“I think what Sen. Manchin did yesterday represents such an egregious breach of the trust of the president. It’s an outcome that we had warned about well over a month ago … it’s why we insisted on having the bipartisan infrastructure plan coupled and passed together with the Build Back Better Act,” Ocasio-Cortez said on Monday.

Manchin’s decision to sink the bill, which needs all 50 Democratic votes to pass in the Senate, came after he pledged to support a version of the Build Back Better framework and negotiated with Biden for months, according to the White House. In a Sunday statement, Manchin said he couldn’t support the bill as written because it would contribute to inflation and the national debt. Economists say the bill will not materially exacerbate inflation.

Ocasio-Cortez urged the Senate to force a vote on Build Back Better, which Senate Majority Leader Chuck Schumer has said he’ll do, despite not having Manchin’s vote. In a Monday letter, Schumer told his colleagues the Senate “cannot give up” on the legislation and pledged to pass some version of it in 2022.

“We are going to vote on a revised version of the House-passed Build Back Better Act — and we will keep voting on it until we get something done,” Schumer wrote.

Ocasio-Cortez argued that the future of the climate crisis hinges on this bill, which includes $555 billion for policies designed to reduce greenhouse gas emissions and would be the largest-ever US investment in green energy.

“We cannot allow the climate crisis to become a catastrophe, which is what is represented right now with this bill going by the wayside or being trimmed down any further,” she said. “Some of us are actually going to have to live on this planet in 50 years and what happens right now determines how bad it’s going to be. And so this is real life, this is serious, and we need to govern like it.”

White House press secretary Jen Psaki released a lengthy, sharply-worded statement condemning Manchin’s move on Sunday. She called his decision “a sudden and inexplicable reversal in his position, and a breach of his commitments to the President and the Senator’s colleagues in the House and Senate.”

Many Democrats in Congress voiced their shock at Manchin’s move and some condemned the West Virginia lawmaker. Sen. Bernie Sanders, who has championed the bill, told CNN on Sunday that Manchin will “have a lot of explaining to do to the people of West Virginia.”

Spanish-Language Version Of ‘Servant Of The People’ To Debut On Public...