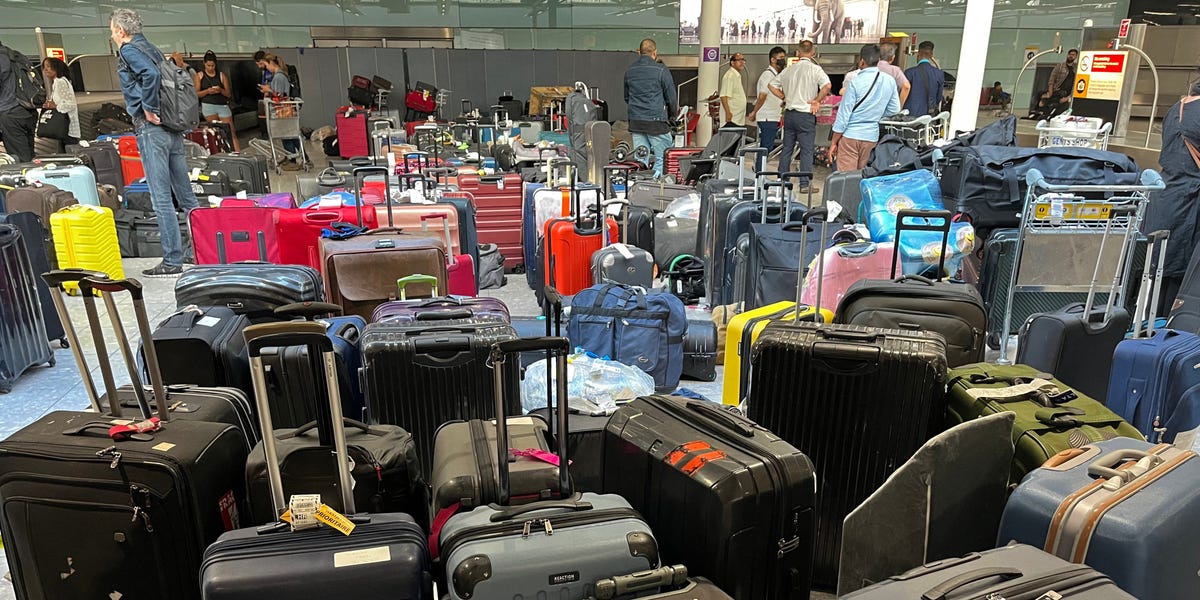 An airline passenger believes his lost luggage was dumped in the trash at Dublin airport.

Fergus Mulligan claims he spotted his green suitcase next to a large trash can in photos shared with UTV last month, per ITV news.

Mulligan returned from a holiday in late June to Dublin airport, only to find his bag didn’t make the same trip.

After he saw the images shared online, Mulligan said he went to the airport for a third time to search for his lost luggage but was informed it was no longer there.

He told ITV news that he doesn’t think it’s likely he’ll ever discover what happened to his bag.

Last month, a whistleblower, who asked to remain anonymous, shared photos with UTV that appeared to show lost luggage being placed in and around the trash can outside the Irish airport.

Some of the baggage also appeared to be opened, according to the news agency.

Sky Handling, the company responsible for baggage handling at the airport, did not immediately respond to Insider’s request for comment made outside of normal working hours.

Dublin Airport declined to comment further on the incident.

The handlers told UTV: “We are not in a position to discuss an individual passenger but we will examine the circumstances of this case based on the information available to us.”

After the original report was shared, Sky Handling told UTV that some cases “had to be destroyed for health and safety reasons” because they contained perishable items.

They said that “the passenger file is updated with those details to allow a claim to be processed.”

Ground handlers at Dublin airport have faced increased government scrutiny since the incident.

There have been multiple reports of lost baggage at Dublin airport. More than 4,000 pieces of luggage have been lost or misplaced in the Irish airport, according to ITV news.

Simply Flying reported that members of the Irish government’s Oireachtas Committee on Transport and Communications had seen the images of dumped luggage and were seeking answers about the incident.

The committee has also responded to the video by setting a deadline of two weeks for the airport to reunite passengers with their lost luggage, according to ITV news.

China is doubling down on its bid to challenge the dollar’s...

Chaos and confusion: All the texts sent to Mark Meadows during...