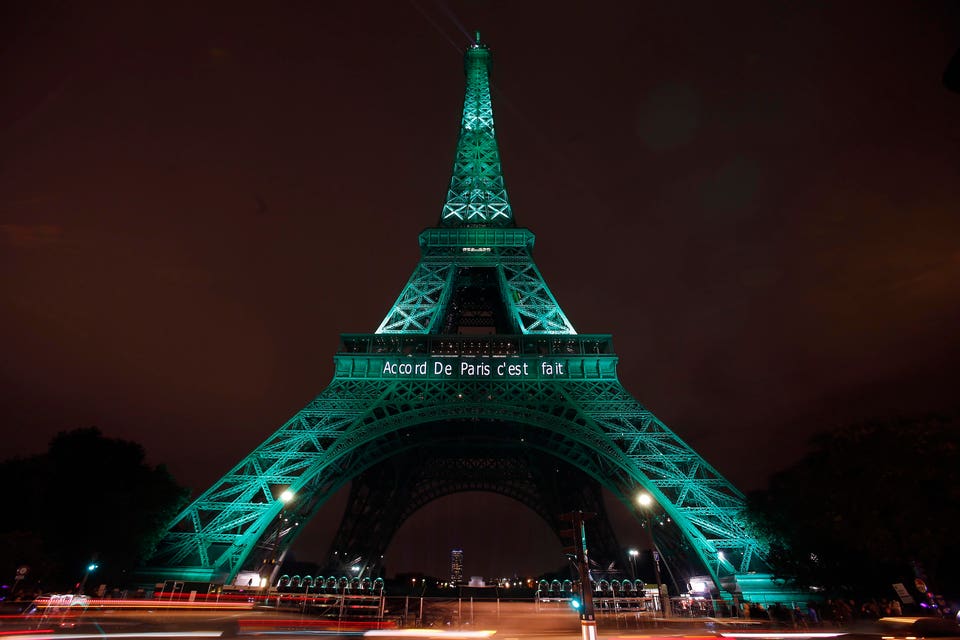 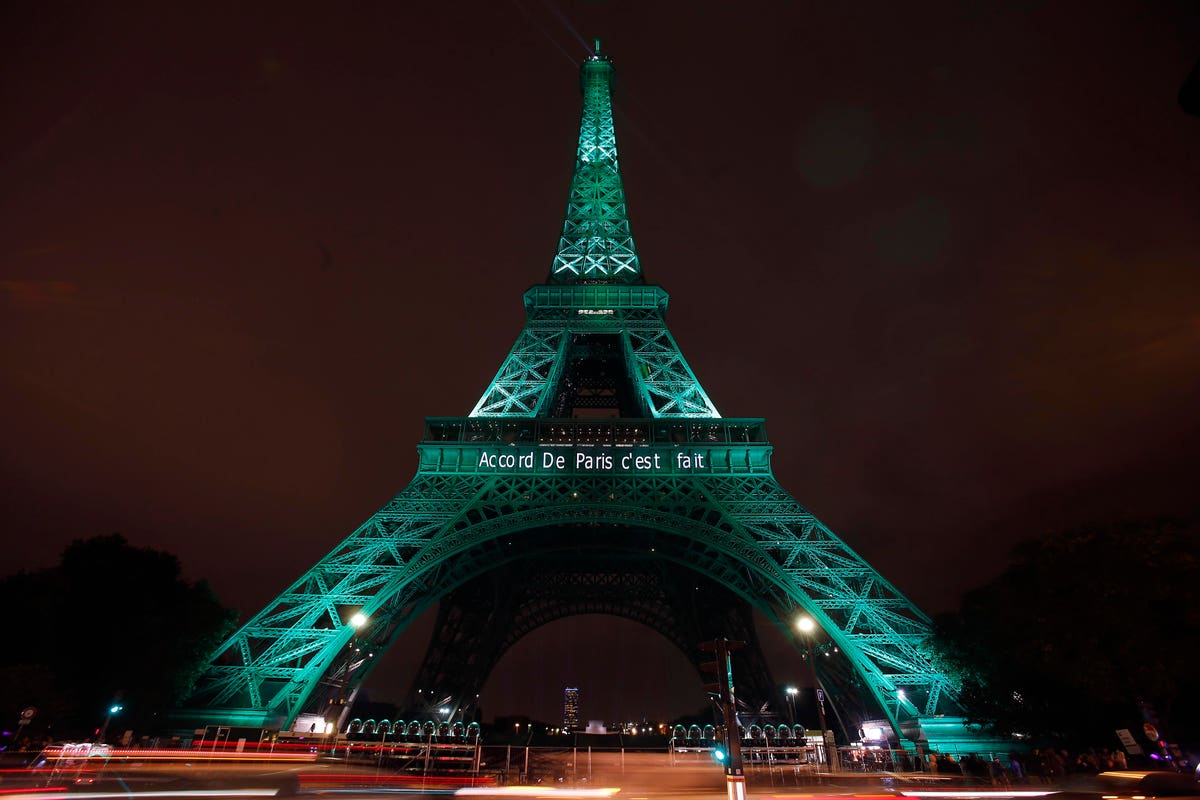 On November 4th, 2016, brilliant green lights illuminated the Eiffel Tower and Arc du Triomphe to celebrate the Paris Agreement coming into effect. Just under a year earlier, global leaders gathered in the City of Lights to hammer out the most comprehensive climate agreement in history. Compared to Kyoto, which took eight years to come into effect, Paris had been ratified with lightning speed. Moreover, the Kyoto Protocol only bound industrialized nations to cut emissions, but the Paris Agreement committed nearly every nation on earth to climate action. However, in the face of rising emissions and mounting climate chaos, would Paris go far enough?

These two pieces are an accessible guide to the most important elements and articles of the Paris Agreement. This piece will explore the overall objectives of Paris (Article 2), emissions reductions and carbon sinks (Articles 4 and 5), efforts at global collaboration (Articles 6, 10, and 11), and adaptation and losses (Articles 7 and 8).

Paris is more than just an emissions reduction treaty; it is an integrated framework for considering the impacts of climate change and accelerating a sustainable transition. The three aims of the Paris Agreement are outlined in Article 2. They include: a commitment to mitigation, “holding the increase in the global average temperature to well below 2°C above pre-industrial levels and pursuing efforts to limit the temperature increase to 1.5°C above pre-industrial levels” (Article 2a). They also cover a commitment to climate adaptation and sustainable development by “increasing the ability to adapt to the adverse impacts of climate change and foster climate resilience and low greenhouse gas emissions development” (Article 2b). Finally, Paris calls for a commitment to make financial flows consistent with a resilient, low-emissions future (Article 2c). Just as the original UN Framework Convention on Climate Change (UNFCCC) had done in 1992, the Paris Agreement acknowledges national differences in development, resources, and climate vulnerability, setting the expectation of “common but differentiated responsibilities.”

Article 4 of the Paris Agreement outlines all signatory countries’ mitigation (emission reduction) expectations. Nations define their reduction targets, referred to as Nationally Determined Contributions (NDCs), and plans to reach those targets. NDCs are submitted to the UNFCCC (the body that oversees the COP process) and progress against them is publicly reported. Every five years, if not more frequently, countries submit new NDCs with progressively higher climate ambition. Under Paris, developed nations are asked to take the lead in setting “economy-wide absolute emissions reductions targets,” while developing nations are asked to accelerate their mitigation efforts and move towards economy-wide reductions. Although countries set their own NDCs, the Paris Agreement specifies that the NDCs should support “rapid reductions” in emissions to reach net-zero global emissions by mid-century. Article 5 encourages signatories to “conserve and enhance” greenhouse gas (GHG) sinks and stores, such as forests, peatlands, and soils. Such protection and restoration efforts complement emission reduction activities.

Article 6 defines collaborative mechanisms countries may use to reach their emissions goals. The first mechanism is the internationally transferred mitigation obligation (ITMOs) (Article 6.2). ITMOs are agreements where one nation reduces its emissions and then sells or transfers those reductions to another nation, which can count the reductions towards their NDC goal. The second mechanism is similar to Kyoto’s “Clean Development Mechanism.” The “Sustainable Development Mechanism” allows countries to finance sustainable development efforts in other countries that can be used to meet their own NDCs (Article 6.4). The third mechanism relates to non-market approaches nations can take to help each other pursue climate and sustainable development objectives (Article 6.8). The Paris Agreement requires transparency for all mechanisms to ensure that transactions result in additional emissions reductions and avoid double-counting.

To stay within our climate goals, developing economies cannot follow the fossil-fueled industrialization pathway of the 20th century. Energy systems worldwide must “leapfrog” fossil fuels and move to renewables and other low-carbon technologies. Unfortunately, most of the funding for low-carbon innovation and deployment occurs in developed countries. Article 10 establishes a technology framework to accelerate technology transfer between developed and developing nations. The framework also considers technologies that can improve climate resilience.

Article 11 complements Article 10 by focusing on capacity-building. Capacity-building efforts focus on developing nations and those most vulnerable to climate impacts. These communities will receive support in implementing their adaptation and mitigation actions. Capacity-building also extends to areas of climate finance, education, training, and public awareness (mentioned in Article 12 too).

While public discussion of the Paris Agreement centers around hitting net-zero carbon dioxide emissions by 2050, climate change is already affecting lives and livelihoods today. Its impacts will only grow more severe with time. Article 7 of the Paris Agreement recognizes the urgent need to support climate adaptation and build resilience in vulnerable communities. Nations must develop and submit National Adaptation Plans (NAPs) that outline risks and resiliency efforts. Across borders, international collaboration on adaptation can determine best practices for assessing climate risks and preparing for climate change. Paris calls on developed nations to accelerate efforts to advance adaptation in developing countries through public, private, and blended finance. Adaptation finance needs in developing nations may reach $340 BN annually by 2030, but worryingly, less than a tenth of this amount is currently being provided.

While effective adaptation efforts can limit some climate harms, certain climatic events have caused, and will continue to cause, significant economic damages. Article 8 seeks to advance climate justice for those most affected by climate impacts and least responsible for historical emissions. The idea of payments for “Loss and Damage” has been one of the most contentious parts of the Paris framework. Major historical emitters (the US and EU) have blocked efforts to assign monetary responsibility for climate losses and damages since the signing of the Paris Agreement. However, a campaign to reckon with the consequences of climate change in the most vulnerable areas has led to a breakthrough. At COP 27, an agreement was reached to create a Loss and Damage fund. However, details about how eligibility and funding remain uncertain.

The next piece will cover the remaining elements of the Paris Agreement and the road to implementation in subsequent COPs.